Presenting Part 2 of my talk from the SCA Science of Roasting session from this year’s Beanstock!

“By 2016, I was increasingly comfortable in my role as roaster and had completed my PhD. Logically, the next step was to open the ‘black box’ of roasting. Not just focus on the output (the techniques for sweet, juicy, and clean coffee) but to ask, why do these work? Why does a declining rate-of-rise create sweetness? Why does a sharp drop bring dull flavours or a flick add roast? This is the impetus behind “Analyzing the chemistry of ‘Modern Coffee’ roasting techniques”. As always, I want to thank NSERC (Natural Sciences and Engineering Research Council) and OCE (Ontario Center of Excellence) for their generous funding and Andrew Paton, from the University of Toronto for partnering with me!

For the project, we selected Ever C Serrudo’s coffee. It is a perfect fit for a couple reasons. First, it has an extremely diverse set of flavours, meaning a wide swath of potential flavour volatiles. Second, we were able to buy his entire crop. This means less prospective variation or deviation compared to a large cooperative or washing station collecting from hundreds of small lot farms. Third, Ever is extraordinary precise and meticulous in picking and processing. So we felt comfortable with level of control present in the starting green.

We then gathered offset samples related to temperature, time, or notable events like first crack. For instance, we troweled out beans at points like 300 degrees or first crack from 4 identical roasts with a constantly declining and smooth Rate of Rise. We then took samples from several roasts which encounter typical errors like underdevelopment, baking, roast, and more baking. The end result was a huge box of vacuum sealed and labeled beans.

My partners of the UofT have been since doing their part with three types of analysis: GC-MS (Gas chromatography–mass spectrometry), LC-MS (Liquid chromatography–mass spectrometry) and DART-MS (Direct Analysis in real time – mass spectrometry). By widening scope to study aromatics, brewed coffee, and the beans, we wanted to break apart the ‘unit operation approach’ to roasting. Through ongoing data identification, we are mapping the appearance and disappearance of flavour volatiles in hopes of understanding how, where, and why these changes occur! This slide below, for example, illustrates peaks generated and identified through molecular weight. In that last column, there literally seven second of difference with substantial shifts. 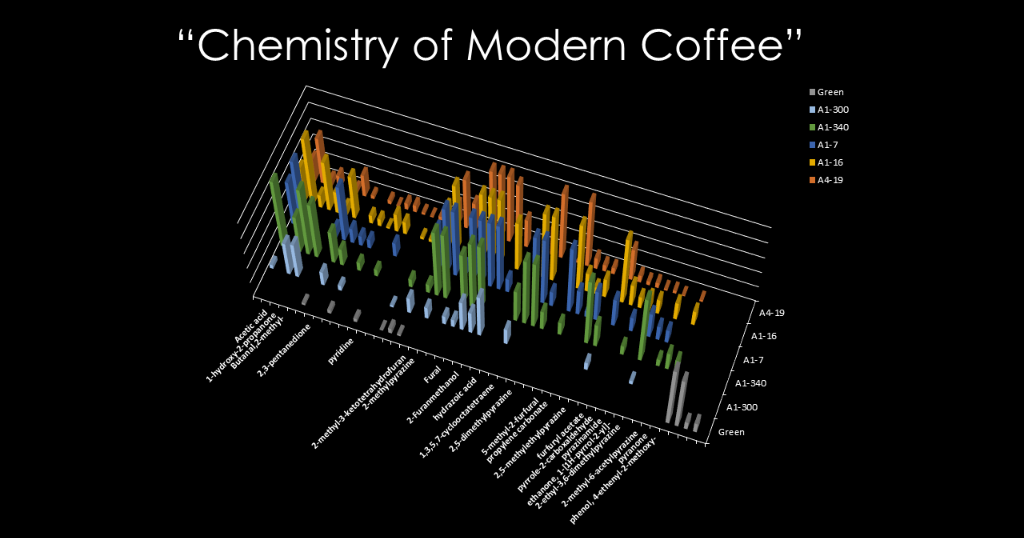 With this summary in place, let me return to Latour and orientate us back to the topic of lore and science. A black box is anything – an idea, a theory, an object, an action – that is so firmly established, we take its interior mechanics for granted. The exist on all levels in endless forms but a box will encounter danger if we ‘pay too much attention’. As we begin to expose the working parts, we allow other alliances and competing networks of black boxes to move in and become the new ‘low maintenance’ accepted standard.

Coffee Roasters have undergone very few changes since the 1960s. Granted we see incremental improvements in quality of burners, fans, controlled ratios for fuel, but on a whole, we see a similar design. This might be most obvious in the thermocouple probes. So much of my daily understanding of a roast comes through the temperature of probes inserted into the roast drum and exhaust pipe. Even in our project, we are focusing on a steadily declining rate of rise in the ‘bean temperature’ garnered from these instruments. Yet the readings are a proxy. The probe sits in the mass of beans but as many people have pointed out: a piece of metal and an organic bean undergoing massive structural changes, pressurized with moving water vapor and active chemical reactions are worlds apart.

One way this ‘black box’ really came under ‘scrutiny’ was the proliferation of Cropster. For the unfamiliar, Cropster is a software program which takes all of the information from the themoprobes and visualizes the data. In real-time, you see curves for temperatures, as well as the rolling rate of rise differentials. The opening of the ‘black box’ came in the question of accuracy. Many roasters were ‘taking for granted’ the information from the probes but as Cropster really emphasized, larger sized probes ‘lagged’ and give the impression of stability despite a tumultuous roast. Small probes designed for speed and accuracy of reading became the new paradigm.

The funny element in the Cropster story is the underlining roaster technology was not open for questioning – just the specifics and responsiveness of a component instrument. With the University of Toronto project, we hope to challenge fundamentals and rethink how we chart roasts. Some researchers in Portugal have been working with Near-infrared to isolate acid development during roasting and, with Andrew, I hope to build some similar models. Imagine a roaster in which you get real-time feedback that represents the volatiles being created and destroyed with the corresponding flavour and aromatic associations. On one hand, it would allow you to really profile a coffee to draw out those unique elements of origin, while on the other, you could get notifications of those less desirable flavours. Essentially an alarm system for those tastes you want to avoid!”