I had a couple requests about posting my SCA talk from last week’s Beanstock in Toronto. SO, everyone gets punished because of the foolish few! It’s long (surprise: I am as long winded in person as I am in text), so I am just going to break it up over the next couple weeks. Also removed the thank-you’s and spiels about the rest of the panel but there still might be a couple hidden in there:

“I have been working in coffee for about six years and during that time I finished a PhD at York. The combined outcome of these two parts of life has been an ongoing project at the University of Toronto looking at ‘the Chemistry of Modern Coffee roasting’. I want to talk a little about the motivation behind that project and its aims and goals. The topic itself is a bit of a challenge, as I could go in depth into the minutiae of roasting’s chemical reactions but I think only a segment of the audience might enjoy that. Equally, I could go very broad but that seems equally a disservice to those interested enough in the topic to join us today. So, I thought the best use of your time would be a more thought-provoking conversation about science in coffee by way of personal experiences.

My version of “but first, coffee” might be “but first, needless philosophy”. So allow me to borrow from one of my favourite French philosophers Bruno Latour and his book Science in Action. The book is perfect for a topic like ‘the science of roasting’ because it explores science as a practice. It specifically examines how theories become entrenched as fact through repeated use in studies, experiments, or lab work. At first, a theory may face scrutiny and inquiry but over time, it is accepted and then naturalized. He uses the example of DNA. We ‘know’ what DNA ‘does’ in a vague way but do not necessarily discern, or question, or even care about its actual functioning mechanics. We concern ourselves with outcomes, that is, the particular effects something, like DNA, has our genetic growth or development. Latour calls this a ‘black box’.

He borrows the term from cybernetics, but recasts it as a way to talk about, precisely those things that we do not talk about! He describes it as “a piece of machinery or a set of commands” that are “too complex” to describe on their own. All that matters is the “input and output” of a black box. Latour’s specific example is about DNA’s double helix shape, so I butchered it slightly, but he goes on to give several examples like diesel engines, vaccines, and chemical elements. It fits perfectly with his philosophy that follows people and objects through their actions and relationships. A rock could be an annoyance in your shoe or a perfect paper weight on a windy patio, but a rock as black box hides a geology lessons about magma cooling and crumbling under volcanic stress. 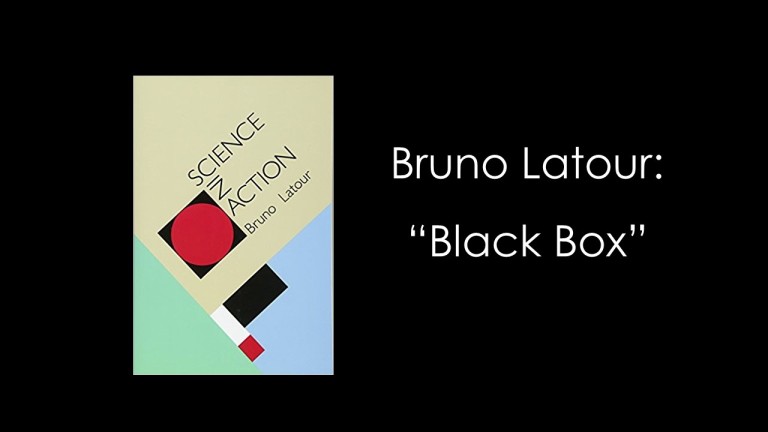 Allow me to quote another one of my favourite philosophers, Graham Harman, talking about Latour: “all human activity aims to create black boxes. Boeing engineers labour to create a new model of jet, which will never reach the market if it breaks down during test flights. In forming a friendship, settling a marriage, or composing a manuscript, our hope is to establish something durable that does not constantly fray or break down”. We aim to create ‘low-maintenance’ black boxes that are outputs rather than things unto themselves. As then we no longer labour over them, question them or spend our time thinking about them.

To the topic at hand: coffee – it is an industry of black boxes. I started training as a roaster in 2014 with the amazing guidance of Cut’s previous Roaster Josh Flear. He had worked with Scott Rao, so had a very clear and established route to sweet, juicy, and clean tasting coffee. I gained so much knowledge in a very short period and remain immensely thankful! However, the one thing that was sticking in my academically trained craw was a lack of explanations. I am sure many of you here are familiar with Scott’s The Coffee Roaster’s Companion, which literally lists his ‘commandments of roasting’ as methods to produce great tasting coffee with the full confession “I can’t fully explain why these methods work but … if you apply these techniques carefully and completely, you will be impressed by how much better your roasts taste”. Modern coffee reacts to traditional roasting styles but never escapes black boxes. It simply supplants them with its own sets of rules in which the effect is the key component.

Concurrent to my roasting training in 2014, I was in the throes of my PhD and what better way to procrastinate writing than to explore the archives for information on roasting! I went to the library and dug deep into the stacks. I found a great wealth of journal articles exploring specific aspects of coffee roasting: formation of chlorogenic acids, pore structure of green beans, caffeine content, and so on. Yet, I encountered a major disconnect when I would arrive at Cut ready to charge a batch of green. Very few, if any, of these journals would describe or engage in the roasting process itself. There were papers that inserted a probe into a single bean and then suspended it above burners and fans to gain insight into chemical changes. There were articles that pushed batch length from the usual ten to fifteen-minute window all the way to an hour and half to see what happens to aromatic development. Some would mention roast degree in passing but very few would state origin, varietal, processing, roast technique or even brew methods.

It was remarkable when I finally tripped over one article, which admitted, “coffee roasting is slightly studied as a unit operation” so “taking into account the variables of the product does not really exist”. If I could rephrase that slightly, from the academic side of the equation: coffee roasting is a black box. Throughout the journals, you see a different iteration of Scott’s line on commandments, in which there is no fault in the information – these are great studies with sound science – just a general disconnect across the gulf from laboratory to roaster. It was a chasm that I decided to cross!”

NEXT WEEK: We start opening the black box of roasting!