I received a couple of great follow-up questions to last week’s discussion on the Caturra versus Castillo/Colombia debate. You were talking about varieties but the bags say varietals, is there a difference?

Variety operates as a noun and varietal as an adjective. Variety can thus describe all of the genetically distinct types of the coffee plant. Bourbon or Typica are varieties of coffee. When talking about a specific instance of the variety, as in a individual farm or cooperative or crop, you can use the term varietal. Thus the new La Palmera contains Typica, Caturra and Bourbon varietals.

A second question on coffee jargon: what is the difference between cultivar and variety? what is a hybrid? Cultivar is (used) interchangeably with variety because it is a short form version of ‘cultivated variety’. I was relying on it last week to discuss the types of varieties historically propagated in labs rather than those mutations occurring in the natural environment. Last week, I used the handy Cafe Imports tree but this week let me crib from the SCAA: 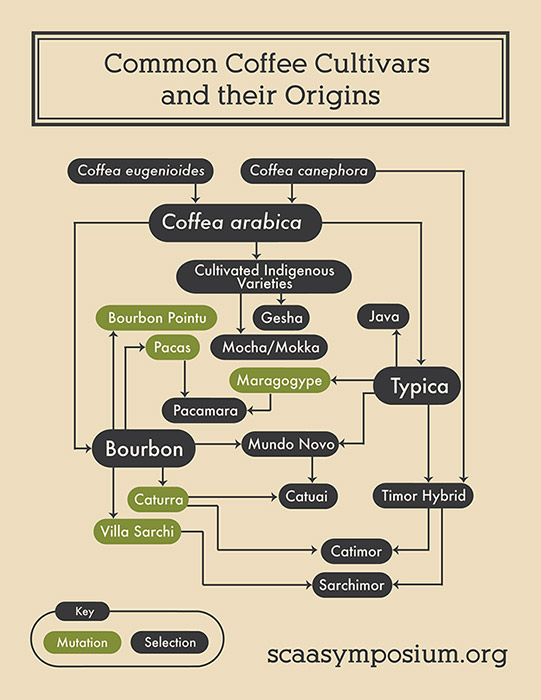 In this diagram, you can see the separation between those varieties that are cultivated (marked in grey as selections) and those whose originate in natural populations (marked in green as mutations). To go back the example last week, Caturra is discovered in Brazil in 1937 but is traceable to Bourbon which is created on Reunion Island. Caturra, and those that following it like Catuai, are examples of  hybrids, resulting from natural or selective breeding of two forms or species of the coffee plant.