A keen eye will note that the new cut offering La Palmera is a Typica, Caturra, and Bourbon mix rather than the increasing more prevalent Castillo and (aptly named) Colombia varieties. So, this week’s question: why is this worthy of note?

First, a primer on coffee varieties! If we peek at Café Import’s handy coffee family tree, you will see the key Arabica, Canephora aka Roubusta and Liberica split at the bottom: 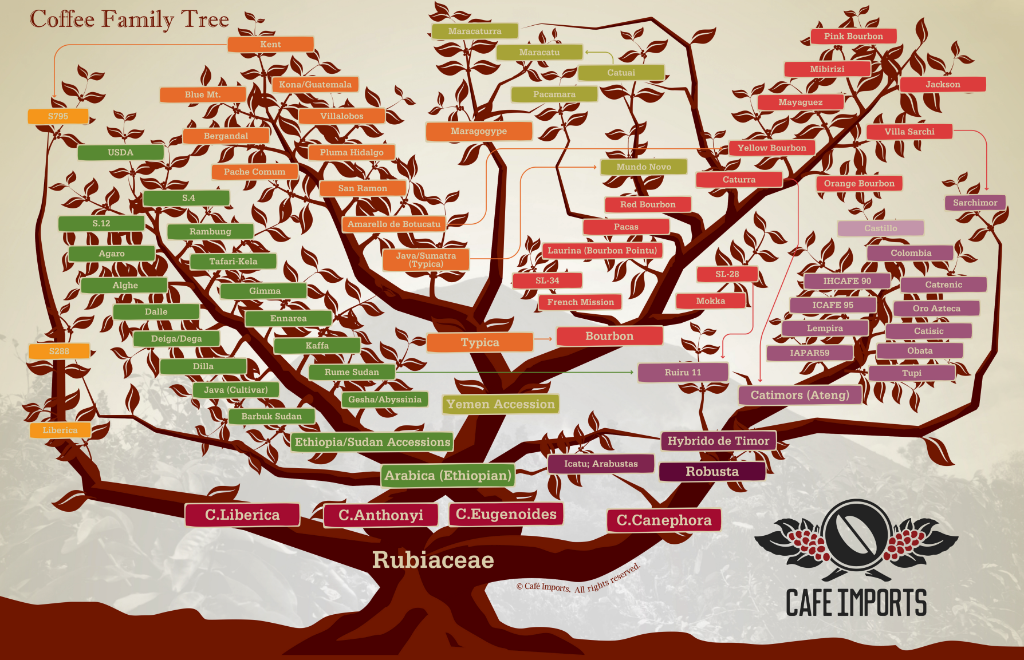 You have likely encountered ad campaigns for bad coffee claiming ‘100% Arabica!’ It is not too bold a claim, given that an estimated 75 to 80 percent of the world’s coffee production is Arabica. Robusta grows at lower altitudes, is highly resistant to pests, and produces more fruit but generally tastes much worse than Arabica. Robusta is often used as a filler (along with chicory) to reduce costs in commodity coffee blends. There has been some renewed interest in high grade Robusta from select specialty roasters but generally, it is still very hard to find. Making those ‘100% Arabica’ claims as suspect and meaningless as ‘100% beef’ or ‘now with vitamin R’ type phrases.

Higher on the coffee tree, there is another key split above ‘Yemen accession’ with Typica and the arrow towards Bourbon. Most cite Typica as the original variety and the basis for most mutations. From Yemen, the Dutch spread it around the world for commercial production. Within these varied new regions, the plant transforms. Bourbon grows on Reunion Island (then Bourbon Island). Its higher yield and perceived sweetness continue to make it one of the most prized varieties. In Brazil, Mundo Nova emerges as a hybrid of Bourbon and Typica. While yet other Bourbon-only mutations appear, like Caturra, which starts in Brazil and quickly spreads across Central America.

Many of those more well-known entries on the above tree originate in horticultural labs. Catuai, for example, is a popular cultivar created by the Instituto Agronomico de Campinas in the 1950s. SL-28 and SL-34 are the product of Scott Laboratories in Kenya, who altered French Mission Bourbon from Tanzania. While these examples could go on endlessly, I do want to focus on two crucial cultivars: Colombia and Castillo. On the tree, you will notice these appear in purple – along the dreaded Robusta line. The National Coffee Research Center or CENICAFE in Colombia created them in response to the outbreak of Coffee Leaf Rust. Caturra is very susceptible to the fungal disease and its prevalence in Colombia led to CANICAFE’s field trials with Timor, a polygenic coffee cultivar with the genetics of Robusta.

The introduction of both disease resistance Colombia and Castillo varieties continues to prove invaluable in reducing the impact of Leaf Rust. However, it also presents farmers with a difficult decision. On one hand, you can potentially save your crop and income by adopting these new varieties. On the other, there is a continued assumption in specialty coffee that Colombia and Castillo lack the potential of traditional Caturra crops, meaning decreased returns.

There have been several ‘sensory summits’ with direct comparisons of Caturra and Castillo but the sample size has always been ridiculously small and drawing any generalized conclusions from a handful of cuppers seems brash. In my experience, the core challenge in roasting Castillo is that the outer shell of the bean hardens over time making it tricky to ensure inner bean development without any scorch or char. With the right roasting technique, this is easy to overcome and I have had many delicious cups of Castillo coffee.

As interesting as varieties and varietals can be, the creation of hard and fast rules seems dangerous. Castillo serves as a perfect example. Its taste depends on growing conditions, harvesting, and processing. A farmer’s level of care and attention certainly transfers to the cup and there is no shortage of great farms using Castillo with great success. Equally, farmers like the Liscano family who risk their livelihood with non-resitant Typica, Bourbon, and Caturra crops need to be compensated with higher prices (and some level of awareness on the roaster and café side).

tl;dr: I try to work with people who do good work and trust the cup not weird industry perceptions.