I promised a discussion of the universal and unique in extraction but received a couple of excellent follow-up to last week’s post. So let’s tackle those and push the brewin’ talk one more week. If you missed the dispatch, we examined the flavours created during roasting that are universal. In other words, those notes that can appear in any coffee despite variance in origin. Well-roasted will do the opposite, provide an often surprising array of unique notes linked to terroir.

So the questions: first, “what are those flavours in the ‘other’ category?“. And second, “I understand the tea as an element of the under side in that Venn diagram but does that mean it is bad?” The former question was referencing this chart: 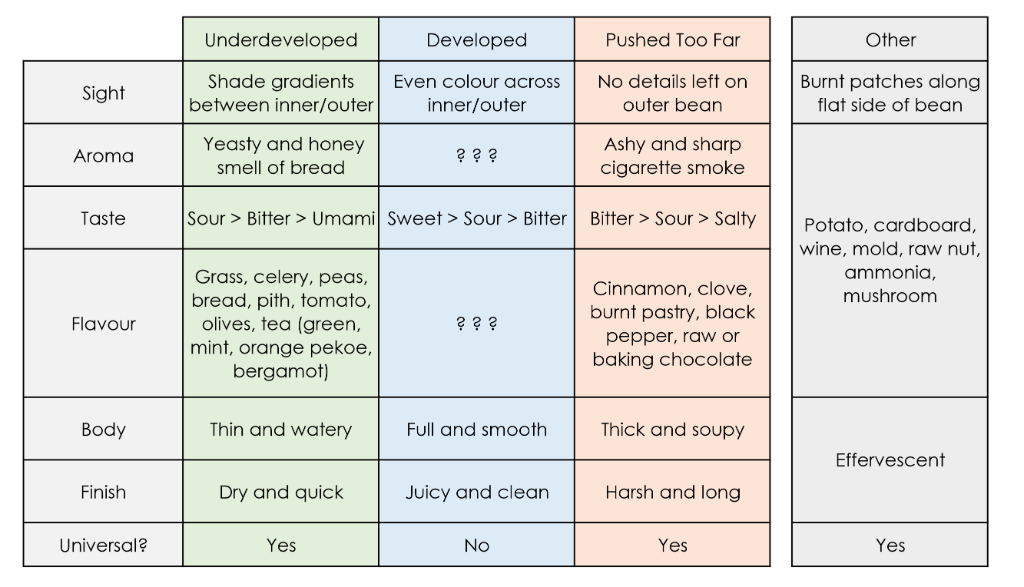 The ‘other category‘ captures various ‘off’ elements that supersede any roasting philosophy or brewing approach. Visually, you might see burnt patches along the flat side of the bean or scorching along the center cut (ridge of the bean). The causes are too slow or fast of a drum speed, an overloaded drum, or an excessively high of a charge temperature. If beans are moving too sluggish or speedy, they will stick to the drum surface, akin to an unstirred pot; similarly, too many beans foster uneven heat distribution, much like an overcrowded pan. I have pointed out the common industry quest for acidity linked to shortened roasts by way of high charges. The result is usually blunted sweetness or a haze of aggressive roasty notes with biting green acidity, especially while a cup is hot.

Moving past visuals to aroma, taste, and flavour. We have actually covered several of these in the past here: why does this taste like potato? As for those remaining ones, like mold, mushroom, raw nut or ammonia, these are due to issues in processing (washing, fermentation, drying). As an industry, we take the complex array of moving parts in growing and production for granted. It undervalues the labour, expertise, and experience of those who make roasting and brewing possible. I have borrowed this scale below from water wise to show one way – improper picking or sorting – will lead to raw nut or wine flavours. Fermentation, drying, moisture activity is the other culprit creating chemical or mildew notes.

The last category in the grey is the effervescence in body and finish. It is a sure sign you are drinking nitro cold brew. Finding a sink should help fix the issue. C’mon! Joking! This does work as a good bridge to the second question about tea as a universal flavour: is it negative or positive?

Between the lines of last week’s dispatch was my usual ‘coffee is a black box argument’. We take development (under, proper, over) as perfect states. “This is spot-on, this is sour, this has roast” and so on. However, it is not an on/off switch.We are making choices through heat, airflow, momentum, pressure, and duration that facilitate or eliminate sets of flavour volatiles. The chemistry is hugely complex resulting in various grades or degrees of development.

Tea-like flavours are easily produced, yes, but they are can be the product of chasing a unique taste utterance. It speaks to the compromises bundled-in with roasting. For example, our current profile for Kolla Bolcha cups indistinguishable from Peach Snapple. In my pursuit of its delicate stone fruit, I use punchy roasts with a long drying time. The result is a developed light roast, which maintains some tea notes right from the boundary lines of underdevelopment. This works both ways, demonstrated with profiles that mingle fruity notes with the haze of spice or burnt sugars synonymous with dark roasts. It is only a problem when the universal is given center stage or top billing (again, true for both under/over) because the cup lacks anything uniquely fruity. It comes down to having faith in those interconnected choices made by your roaster.

Next week (for sure this time): the universal and unique in extraction!